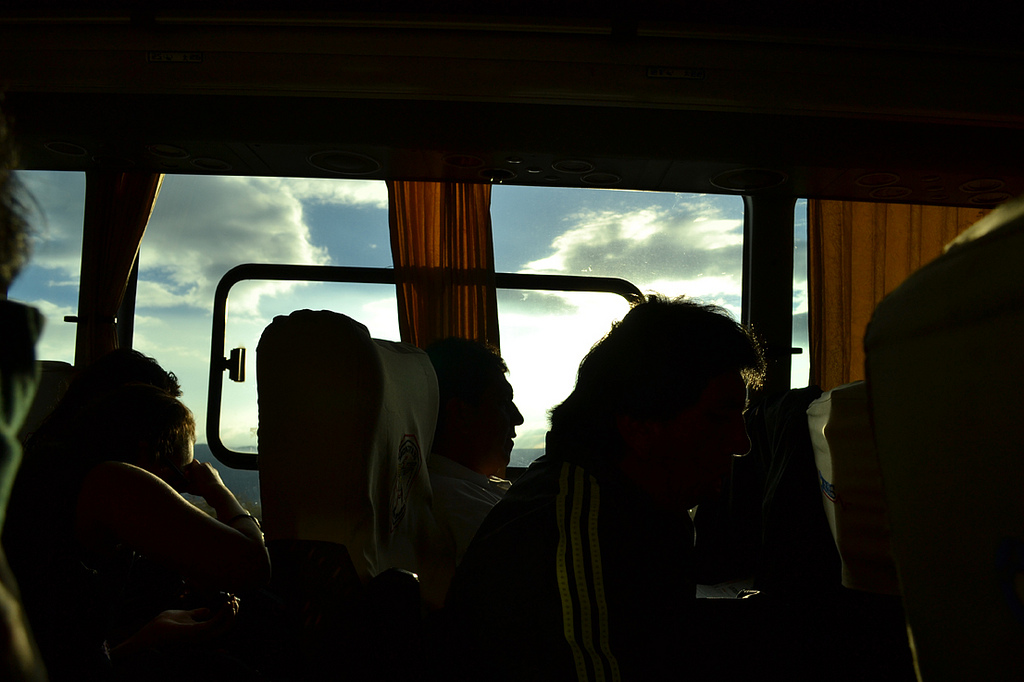 Daniel Alarcón: I’m Daniel Alarcón, executive producer at Radio Ambulante. Before we begin, I want to thank two foundations for their essential support: The Sara & Evan Williams Foundation and the Panta Rhea foundation.

Thanks also to our sponsor, MailChimp. Over 7 million people and businesses worldwide use MailChimp to send emails and newsletters. Radio Ambulante, by the way, is one of them. To learn more, visit mailchimp.com.

And Squarespace. Start building your website today at Squarespace.com. It’s an intuitive platform that is easy to use. You can be like me, completely useless in all this related to technology, and still get it right.  Modern templates that look just as good on mobile screens or on a computer.

Use the code ambulante at checkout to get 10% off. Squarespace –Your new website awaits.

Christian Martinez: We were used to traveling a lot, and there were always checkpoints set up by the guerrilla, the army, or the paramilitary. But whenever they stopped us, we would say that we’re musicians and they would let us go. But that day it was different.

Daniel Alarcón: That is Christian Martínez. When he was 21 years old he played bass in a tropical band from his hometown, Aguachica, 600 km north of Bogotá. The band was made up 16 musicians, and they played in local festivities around the area. At this time –we’re talking about 2003– the conflict between the Colombian army, the guerrilla and the paramilitaries was still in full swing.

One day Christian’s band played at patron saint festivities in a town in the mountains, five hours away from Aguachica.

The celebration ended at around 1 AM, and it was a hit. As soon as it was over, the band got on the bus to go back home.

But they wouldn’t get there that night. Something happened.

Christian Martinez: We came to an agreement and promised that this had to stay between us. We could never talk about this.

Remember: we’re in northern Colombia, in a lonely road, at one in the morning.

Christian Martinez: I was tired from the trip, from playing. Many of my bandmates were already sleeping. Others were awake, but the lights on the bus were off. And halfway home, after a couple of hours, the bus stopped.

I was half awake and I heard some voices from people that had gotten on the bus. These people were wearing uniforms, they had guns, and they said they were from the guerrilla, the National Liberation Army, the ELN. And they were asking us for our IDs.

They said, “OK, get off the bus, this is a search”. That’s when I got more nervous, because at other times they had just asked us for identification and let us go.

But this time they made us get off the bus, put our hands up, they searched us, searched inside the bus, searched the instruments. So things started looking more complicated than I thought.

And I started thinking that there shouldn’t be any problems, because I knew we were not carrying guns, we didn’t have drugs, just instruments.

After they searched us they said, “Now get on the bus because you’re going with us”.

That’s when I felt the world sinking, because that sounded practically like a kidnapping.

My hands got cold. We were all pale. We got on the bus and they told us to cover our eyes; to get some shirts, t-shirts, anything, to cover our eyes so that we wouldn’t see where we were going.

I could hear my bandmates praying out loud. We were all about to cry, about to shit our pants. I think the bus took a different turn, because when the bus stopped around 30 minutes later, we were practically in the jungle.

The bus stopped, they made us remove the t-shirts from our eyes, and they told us, “Well, now get ready because you have to walk. You have to walk through this mountain with us, and you have to bring your instruments”.

And I thought “What!?”. And that’s when one of them said that it was their commander’s birthday and that we had to play at his party.

On the one hand, I was glad to hear that we were being kidnapped only to play. But in turn, we were still hostages.

We started taking the instruments off the bus, but then another problem came up: if we were in the dark, on top of a mountain, how the hell were we supposed to carry our things? And that’s when I heard a couple of guerrilla soldiers say, “Hey! give me that drum, I’ll take it”. So with a gun on one side they started carrying the congas, the cymbals, etc. and we followed them.

We walked in a line. It was cold and there was no light, at all. Just a guerrilla soldier leading the way with a flashlight.

The camp was a farm. There was a party with food, because they were cooking sancocho, we could smell the chicken soup.

We wanted to give them a good show, because we wanted them to be happy with us. We didn’t want to make them mad because we knew our lives were in their hands.

When we started playing we were trying to cover how scared we were. We were pretending that we were OK, but we were not feeling well at all.

I was super nervous, with cold hands, cold sweat, pale. A bandmate was about to throw up from the fear. It was like a nightmare.

But we started playing and something happened.

People began to enjoy our music and they started dancing and smiling. And we looked at each other and started to smile for the first time too. We forgot where we were, with whom we were, how bad our night was and for a moment we began to enjoy it.

Everything was going great, and then we heard gun shots…Papapapa!

¡Wow! Man, when I heard those gun shots all I wanted to do was toss my bass and start running. But I couldn’t, because I was like that, frozen; and many of the members of the band were also shocked, some ducked. And the first thing I thought was that the army had gotten in; it was an ambush by the army and we were in the middle of a shootout and we were going to get killed right there. “They killed us!” I said.

But no, what had happened was that a guerilla soldiers was dancing, drunk, and he got his gun and starting shooting it at the air, like a crazy person.

We didn’t want to keep playing because things were getting ugly. The truth is that it was a very strange experience. They had guns and they made us do whatever they wanted. But at the same time they were treating us like their guests; they offered food, they offered liquor –they even paid us after we played. So it was like sleeping with the enemy.

So when we were eating we took the opportunity to talk to our director and ask him what was going on. And the director told us that we shouldn’t worry, that they were happy, that they just wanted us to keep playing and after one more round we would probably be able to leave.

A bandmate got an idea: after we finish eating we would start playing songs that are not as upbeat, like more mellow, so that they would sit down, and to create a heavy ambience so the guerilla soldiers would start getting sleepy and sit down and let us go.

We got on stage and started playing those songs. The plan was working. I was seeing people getting tired, like they didn’t want to keep dancing, like the drunks were starting to sit down.

So we kept playing a couple more songs and our director told us to stop, that we didn’t need to keep playing because they wanted to listen to other music they had on CD. So we stopped playing, we started packing our instruments and leaving.

We walked back through the same path. It was still dark, but the sun was starting to rise. I could hear the birds singing in the trees, but not much else. We were all silent. I think people were praying. It was like a time for reflexion, to be honest. We just kept walking and in about 30 minutes we got to the bus.

We got on the bus, packed the instruments and left.

Once we were relatively far away from that area we started yelling and laughing and saying, “we’re free! we’re free”. It was like a moment of happiness when we realized that thanks to God we had come out alive, that we had been very close to talking, eating and drinking with death.

And the director told us that we had to promise that what had happened had to stay between us, that we couldn’t talk about it or comment on it with anyone else in our homes or with our friends.

Where we lived, our town, there were more paramilitary than guerrilla soldiers, and the paramilitary were the enemies of the guerilla. So if the paramilitaries heard that we had played for the guerilla, they would think that we were guerilla or that we were collaborators, and they would treat us like guerrilla. They could hurt us, they could kill us. So we all agreed, and we promised that it had to stay between us. That we would never talk about this with anyone else.

However, after many years I want to talk about this for several reasons. I want to share my story because I want people who are outside the country to realize that most Colombians, like me, don’t want to be part of this conflict. We don’t choose to sponsor any of the sides involved, but we are still trapped in the middle of this war. And that is why we are afraid to talk; because talking against the guerilla, the paramilitary or government corruption is dangerous for all of us. I’m tired of this situation. And I’m tired of being silenced by fear.

Daniel Alarcón: Christian Martínez keeps playing music and now he lives in the United States. The song you’re hearing is called “Muerte”, and he composed it. In Radio Ambulante’s website we’ll have links so that you can get to more of Christian’s music.

A version of this story in English was originally released by one of our favorite shows and podcasts: Snap Judgment. The producer, Nancy López, was part of our team when we first launched Radio Ambulante over three years ago. ¡Thanks so much, Nancy! And thanks to Glynn Washington, Snap’s executive producer. You can find a link to that story on our website.

This version in Spanish was produced by independent radio journalist Jennifer Dunn, who is also Christian’s wife. The story was mixed by Martina Castro and edited as a team by Camila Segura, Silvia Viñas, Martina and me, Daniel Alarcón.

Thanks again to our sponsor, Squarespace. The best platform to build a perfect website. You can start today, using the code ambulante. Visit them squarespace.com. 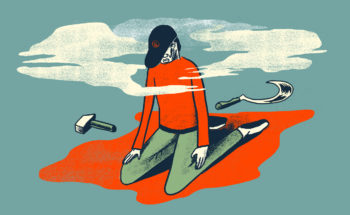 It’s never easy to break with your parents’ world view.

His life and mine

57 years of doubt and a possible key to finding 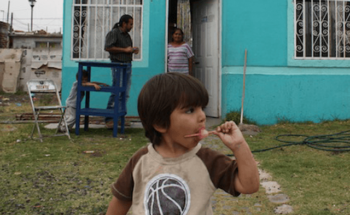