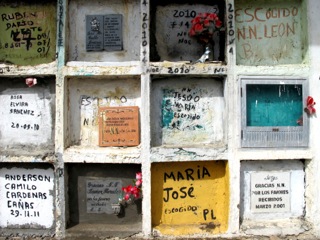 [Daniel Alarcón]: I’m Daniel Alarcón. Today in Radio Ambulante: No Name. In Northern Colombia there is a town called Puerto Berrío. There, since the 80’s, bodies have appeared floating down the Magdalena River — hundreds of anonymous bodies, victims of the violent conflict. Journalist   Nadja Drost traveled to Puerto Berrío to investigate the relationship that has formed between the living and the dead.

This story is told by Annie Correal.

[Julio Marín]: Most men normally go… face down… And the women always go face up.

[Annie Correal]: When Julio Marín fishes in the Magdalena River, it’s not uncommon for him to find a body in the water, one more person who’s suffered a violent death.

[Julio Marín]: I say it’s like a, eh, a… like a floating cemetery… you see the bottleneck… clogged because you can see so many bodies in the river… you can find seven, eight in the river, one after another… it’s very tough… and at night, you say to yourself, “Ugh, what’s happening?”

[Annie Correal]: I ask Julio how many bodies he’s seen.

[Julio Marín]: In the… in that river? Hmm! Murders? I’d say at least, around 200… murder victims in this river… and you find body parts. Who’s hand is that? Uh, where could the rest of the body be? And who could that person be? Why did they do that to her? Who could that guy be? And where could they be going? Ugh, and where are they coming from?

[Annie Correal]: For decades, paramilitary groups have thrown the bodies of their enemies — guerilla fighters and civilians — into the river, turning it into a dumping ground for bodies. The vultures flying over its water announce the arrival of one more body.

It’s a sunny day in Puerto Berrío, a town with about 50,000 residents. The gravedigger, Ramón Morales, is opening the municipal cemetery. His rings and necklaces reflect the sunlight, and the keys to the cemetery hang from a chain hooked to his belt.

[Ramón Morales]: Let’s see, this pavilion is a pavilion that is made up of three blocks, A block, B block… Let’s head up there a little…

[Annie Correal]: Ramón takes me to a large pavilion, about the size of a bus. There are more than 350 graves, one on top of the other. This section of the cemetery is reserved for people who can’t buy a grave — for the anonymous bodies that come from the river. Most of the graves are painted with the letters ‘N.N.’

[Ramón Morales]: They have numbers…

[Annie Correal]: The N.N.’s graves are the most decorated in the cemetery. Some of them have bouquets of flowers and figurines, and they’re painted in vibrant colors.

[Ramón Morales]: This one for example: Guillermo Zapata. Chosen.

[Annie Correal]: Yes, chosen. ‘Chosen’ means that someone has picked this body — they’ve adopted it. When they adopt a body, they give it a new name. They baptize it and pray for its soul. Sometimes, they even make up a name with the initials N.N.

[Annie Correal]: I ask Ramón why someone would pray for a stranger.

[Ramón Morales]: They believe, according to what they say, that these people that they don’t know, that they’re… they’re the least protected, right? They’re so unprotected they don’t even know their names. They’re the ones that are most likely to grant favors. That’s the belief… right? Well, come on. I’ll show you over there. Look…

[Annie Correal]: Protection, work, reconciliation. Those are the favors people expect from the N.N.s. According to the people of Puerto Berrío, there are people who have even used their N.N.’s burial date as lottery numbers… and they’ve won. Ramón shows me examples of the favors written on many of the graves. They’re plaques carved with messages of thanks.

[Ramón Morales]: Thank you, blessed souls, for the favor received.

[Annie Correal]: He doesn’t know exactly how many N.N.s have been buried at the Puerto Berrío cemetery.

The records are incomplete, and the bodies are constantly in the process of moving: they go from a pavilion to a warehouse or in other cases a mass grave.

What he does know is that violence has decreased in recent years, and there aren’t as many deaths as there were before.

Good news for Colombia, of course. But, for devotees to the N.N.s, this brings up an issue: there is a greater demand for N.N.s than there are bodies. Sometimes they even have to share.

María Dilia Fajardo is closing up her cantina downtown. She has a towel slung over her shoulder, and she’s moving between the three tables of the establishment until she takes a seat.She tells me about her N.N.

[María Dilia Fajardo]: When I saw her I named her María de los Ángeles…

[Annie Correal]: María used to visit her N.N. every Monday without fail.

[María Dilia Fajardo]: Well, at least I imagined she was a woman… a pretty, white woman, around 17 or 20 years old maybe… blond hair [pelo mono], pretty.

[Annie Correal]: “Pelo mono” means “blond.” One day, María realized that someone else was visiting the N.N. that she had baptized. That someone was Jair Urego.

[Annie Correal]: Jair Urego is sitting in his yard on the other side of town. He has a few framed photos, all of a grave —that same grave that houses the N.N. María de los Ángeles. Only Jair gave her a different name: Gloria.

[Annie Correal]: This unidentified body has two devotees, but she still grants them favors. To thank her, they got together some money and bought her an ossuary.And what name did you put on the grave?

[Annie Correal]: They even celebrated the anniversary of her burial.

[Jair Urego]: Ah, I show up and I get a… and I buy her a cake, a little cake, I buy her a bouquet, and I bring it to the cemetery, and I light a candle for her.

[Annie Correal]: Colombia is a country with more than 50,000 disappeared persons, the result of five decades of conflict.

In Puerto Berrío, that violence is a reality that can’t be avoided. Almost everyone has lost a friend, a neighbor, a relative.

[Annie Correal]: I meet Nuri Bustamante in her home. She has two laminated photos in her hands: one of her son and the other of her daughter. She uses them to fan herself as the hot sun streams through the window.

Nuri had nine children and one N.N. According to her, her bad luck started when her N.N. was moved to a mass grave. Not long after, her 21-year-old son disappeared. And then, her daughter Lizeth, who was only nine, went to the corner store… and never came back.

[Nuri Bustamante]: And not long ago I had a dream, it was really nice, in it I saw myself talking to a young woman, and I said to her, “Are you Lizeth?” and she said, “Yes, mommy, it’s me,” and we hugged and cried.

[Annie Correal]: The justice system is slow, and finding a disappeared person in Colombia is extremely difficult. So Nuri and thousands of people in her same situation know that they need a miracle to find their loved ones. Without remains, without answers, they rely on the N.N.s.

[Nuri Bustamante]: When we adopt them, we give them a name because we hope that just as we’re giving them a new identity, we’re baptizing them again, someone somewhere will come across another person like that and do the same thing. Because we don’t know if they’re out there: our people, our children, our siblings, any one of our loved ones.

[Annie Correal]: Every night in November, the month of souls in the Catholic calendar, the devotees of Puerto Berrío march through the town after midnight. The procession starts at the cemetery, where an animero awaits them.

[Hernán Montoya]: Dear Lord, most loving redeeming Father of souls, may you take them from the harsh prison of the…

[Annie Correal]: The animero, Hernán Montoya, is someone who supposedly helps souls in Purgatory find peace. He’s a thin man with a kind face, who looks older than his 57 years.He’s smoking a cigarette to calm himself before calling everyone together. Then he puts on a black blanket made of plastic.

[Hernán Montoya]: When I put on this outfit I become… I’m like the police of respect, the priest of respect.

[Hernán Montoya]: Those of you who are not devotees of the souls in Purgatory or don’t believe in them, who are only messing around, do not follow me… Let me tell you, you do not play around with the souls of Purgatory. One Our Father… and one Hail María

[Annie Correal]: Hernán rings a bell to call forth restless souls, to get them to come from their graves. Then, they leave the town. Many are carrying candles in their hands. Two hours later, they return to the cemetery where people have left glasses of water on the graves for the souls in Limbo.

[Followers]: Lead us not into temptation and deliver us from evil, amen. Hail Mary full of grace, the Lord is with thee…

[Annie Correal]: Puerto Berrío isn’t the only place where there are hundreds of anonymous dead filling the cemeteries.

There are many—too many—towns that are experiencing the same harsh reality. And in those towns, the N.N.s aren’t a topic of conversation. But Puerto Berrío is different.

Here, people can’t trust in life, so they chose to put their trust in the dead.

One day, while visiting Nuri, the mother who has two disappeared children, she tells me that she never adopted another N.N. after the first one was lost.

[Nadja Drost]: Have you ever wanted… another N.N.

[Nuri Bustamante]: Yes. Because I’m still asking for her. I have to keep asking for my daughter.

[Annie Correal]: When I heard her, I remember that one afternoon in the cemetery, the animero showed me five graves of N.N.s, hidden behind a wall. Perhaps Nuri could have the N.N. she wants so badly. I tell her about the graves.

[Annie Correal]: Then, we go. Nuri’s voice shakes when she asks me to go a few blocks out of the way. She explains that she always avoids the corner where her daughter disappeared.

I show her a few tombs behind the wall with the letter N.N. and I ask her if she would prefer a man or a woman.

[Nuri Bustamante]: They tell me that… I’m better off with a man.

[Annie Correal]: Nuri inspects the graves. Finally, she picks one, knocking on it to get the N.N.’s attention.

[Nuri Bustamante]: I commit myself to you. Give me what I ask for. I need two very big favors.

[Annie Correal]: Nuri asks for a job for her son and for help with the money she owes.Then, she takes a brush she brought from home and starts painting the grave. She picks a pretty, happy color: sky blue.

[Nuri Bustamante]: You ask for me, and I’ll plead for you.

[Annie Correal]: With those words, Nuri makes a pact with a deceased person, and another N.N. gets a new life.

Radio Ambulante looks to discover the stories of Latin America. We record in KALW in San Francisco, California. To listen more visit our website, radioambulante.org.

What is it like to come out into the light 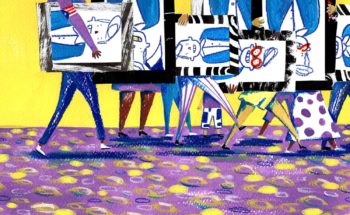 The Governor in His Labyrinth

An island rises up. A secret chat, an anonymous source, a 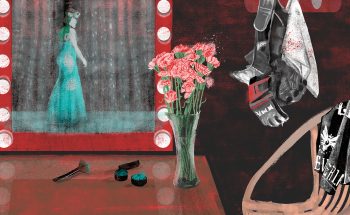